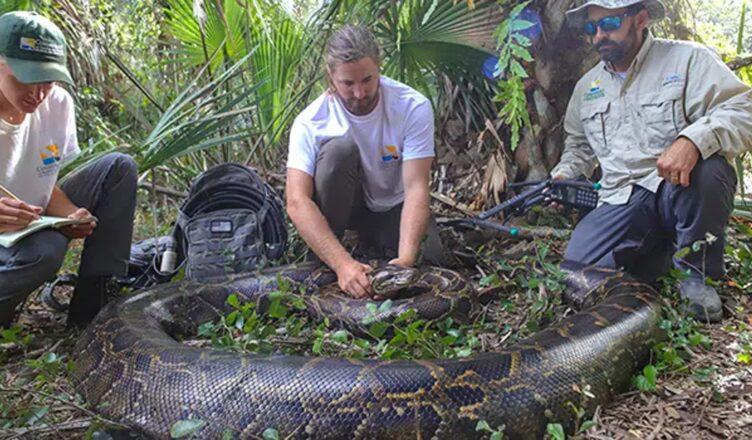 Burmese pythons seem to only get bigger and bigger, according to the Conservancy of Southwest Florida, which recently announced its third record-breaking discovery in the last decade of the largest python found to date in the Sunshine State.

Weighing in at 215 pounds and measuring nearly 18 feet in length—about the size of a shipping container—three wildlife biologists from the Conservancy captured the female python using radio transmitters implanted in small male “scout” snakes. Those transmitters allow researchers to understand python movements, breeding behaviors, and habit use.

“How do you find the needle in the haystack? You could use a magnet, and in a similar way our male scout snakes are attracted to the biggest females around,” said Ian Bartoszek, wildlife biologist and environmental science project manager for the Conservancy of Southwest Florida in a statement.

Bartoszek said the team placed a male scout snake name Dionysus—or Dion for short—in the western Everglades, where he slithered around for several weeks.

“We knew he was there for a reason,” he said.

Bartoszek and the team found Dion with the largest female snake they had ever seen and attempted to restrain the massive snake. However, the female python didn’t go down without a fight.

In a press conference last week, biologist Ian Easterling said the python balled up her tail and made an attempt to tail whip the team. While Bartoszek and intern Kyle Findley dodged the attack, the snake slapped Easterling in the face.

“She put up a pretty good fight,” Easterling said.

Researchers also said another record-breaking discovery was made when they found the snake had carried 122 developing eggs within her abdomen during the necropsy. The finding set a new limit for the highest number of eggs a female python can potentially produce during a breeding cycle.

During the necropsy, researchers determined the python had an adult white-tailed deer hoof cores found in her digestive system, which is also a primary food source for the endangered Florida panther.

Although researchers discovered the python in December, the Conservancy made the announcement last week after National Geographic published an exclusive article. The article highlights how Burmese pythons have caused rapid reproduction and depletion of surrounding native wildlife, making them invasive species.

In addition to the Conservancy researchers finding dozens of white-tailed deer inside Burmese pythons during necropsies, colleagues at the University of Florida have also seen 24 species of mammals, 47 species of birds, and two reptile species from the stomach of pythons.

“The removal of female pythons plays a critical role in disrupting the breeding cycle of these apex predators that are wreaking havoc on the Everglades ecosystem and taking food sources from other native species,” Bartoszek said. “This is the wildlife issue of our time for southern Florida.”

Governor Ron DeSantis (R-FL) said in a press conference earlier this month, “It’s just unbelievable what they will ravage when they’re there.”

“These snakes are destroying the natural food chain, and you can’t have a healthy environment without a healthy food chain,” DeSantis said.

DeSantis said the state of Florida had spent more than $3 million on removing pythons using tools and technology to detect such large snakes.

“The Everglades, of course, is a diverse ecosystem, and we are protecting this ecosystem in a variety of different ways,” DeSantis said.

The last time Bartoszek and his team made a record-breaking discovery was in 2016, when they came upon a 185-pound Burmese python. Two years earlier, they found the first 100-pound python.

“We don’t really consider pythons big until they top 100 pounds, so now I need a new description for a 200-pound python,” Bartoszek said. “It’s just next level for us.”

The Conservancy established a python program in 2013. Since its founding, they have removed over 1,000 pythons weighing more than 26,000 pounds of adult pythons from approximately 100 square miles in southwestern Florida.