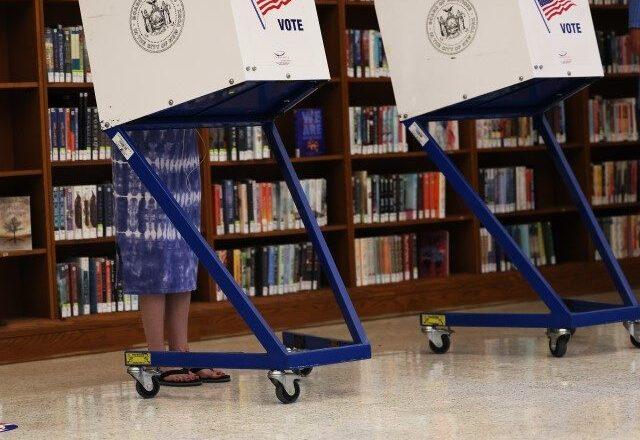 Voters in several states head to the polls on Tuesday in the final major primary election night before a few big elections upcoming in August, with Republicans hoping to keep momentum growing ahead of November and Democrats clamoring to hang on to the slivers of power they still have.

Several big states like New York, Illinois, and Colorado will select GOP and Democrat nominees in primaries on Tuesday, while other states like Utah and Oklahoma will do the same. Mississippi will hold a runoff election for the GOP primary for the district of Rep. Michael Guest (R-MS), who was surprisingly much weaker than expected in the primary’s first round a few weeks ago with challenger Michael Cassidy earning more votes than Guest the first go-around. Establishment Republicans have gone all in for Guest and tried to turn the tide against Cassidy, so Tuesday’s results will show whether they were successful or whether Cassidy was able to harness his shocking first round performance into a formal nomination win.

The first primary elections since the U.S. Supreme Court overturned Roe v. Wade nearly 50 years after the Court first made the ruling will also provide evidence as to whether or not the left has newfound energy heading into this all-important midterm election season.

Voters in New York will select a GOP nominee for governor. Rep. Lee Zeldin (R-NY) is easily the favorite but faces several challengers, including former New York City mayor Rudy Giuliani’s son Andrew Giuliani and businessman Harry Wilson. The winner of the GOP nomination for governor is likely to face incumbent Democrat Gov. Kathy Hochul in November. Hochul rose to the position when her predecessor Andrew Cuomo resigned in disgrace.

Later in the year, several congressional primaries in both parties are worth watching here, too, as Republicans battle to succeed retiring Rep. Chris Jacobs (R-NY) upstate, and downstate Democrats have an internecine member-member primary battle between Reps. Jerry Nadler (D-NY) and Carolyn Maloney (D-NY)–two committee chairs forced to run against each other due to redistricting. These primary races happen later, on Aug. 23, because the redistricting process took longer this cycle so the congressional primaries were delayed.

In Illinois, Republicans will select nominees for both the governor and Senate races–which could become competitive in November with the current environment. Republicans have won statewide in Illinois in recent years, so that remains a possibility. But more importantly, GOP primary voters will decide a member-member primary caused by redistricting between Reps. Mary Miller (R-IL) and Rodney Davis (R-IL). Former President Donald Trump has gone all in for Miller and hosted a rally with her this weekend.

Colorado voters will decide several key primaries, including who the GOP nominee for U.S. Senate will be. In Utah, Sen. Mike Lee (R-UT) aims to hold off a primary challenger while he prepares for a general election battle with Never Trumper Evan McMullin–and Democrats appear to be colluding with McMullin to influence the outcome of the election in a desperate ploy to beat Lee.

Oklahoma, meanwhile, has both U.S. Senate seats up this year with the looming retirement of Sen. James Inhofe (R-OK). Sen. James Lankford (R-OK) aims to hold off a primary challenger, while Rep. Markwayne Mullin (R-OK) appears from public polling to be the frontrunner in the GOP primary to succeed Inhofe.

The polls close in Mississippi, Illinois, and Oklahoma at 8 p.m. ET,  New York and Colorado at 9 p.m. ET, and in Utah at 10 p.m. ET. South Carolina also has runoffs scheduled for Tuesday–and the polls close there at 7 p.m. ET–but there are no major races of national political importance there this week.

Follow along here for live updates as the results pour in from across the country.

The AP finally calls it for Rep. Mary Miller (R-IL) in Illinois:

This is a very big win for Trump as this was no certain victory until he campaigned for her this weekend at a huge rally in Mendon, Illinois.

Heidi Ganahl has won the GOP nomination for governor in Colorado:

McMullin is colluding openly with Democrats who deliberately did not nominate a candidate thinking he was their best shot at beating Lee.

The AP finally calls it for Mullin in Oklahoma, as he will advance to a runoff in August assuming he stays under 50 percent tonight:

Some are already calling New York for Zeldin:

Decision Desk HQ projects Lee Zeldin (@leezeldin) is the winner of the Republican nomination for Governor in New York.

The polls have closed in Utah, and we’re awaiting results there.

Dave Wasserman from Cook Political Report is saying that Rep. Mary Miller (R-IL) has won in Illinois in the 15th district GOP primary:

It’s still not formally called by the AP yet, but with 39 percent reporting she leads by more than 16 percent. This is a huge win for Trump, who went out to Illinois this weekend to campaign for Miller against Davis.

The AP still hasn’t called it for some reason, but down in Oklahoma’s other Senate primary Rep. Markwayne Mullin (R-OK) leads by a gargantuan margin. With 61 percent reporting, Mullin’s 46 percent is more than 70,000 votes better than TW Shannon’s 16.6 percent.

Zeldin has expanded his lead to more than 9 percent in New York over Giuliani.

With 18 percent in now in the Illinois 15th district GOP primary, Miller’s lead seems to be hanging on at more than double digits. She is at 55.6 percent as compared with Davis’s 44.4 percent.

With 11 percent in now in New York, Zeldin has moved way ahead big time. He’s nearly 3 full percent ahead of Giuliani.

Zeldin has now taken a very slight lead over Giuliani in New York. His 17,306 is less than 30 votes better than Giuliani’s 17,278 with 9 percent reporting.

With 9 percent reporting in New York’s GOP gubernatorial primary now, Zeldin has cut Giuliani’s lead down to almost nothing. Less than 100 votes–and 0.2 percent–separate them, and Zeldin seems to be gaining quickly as much of the rest of the state reports.

Rep. Steven Palazzo (R-MS) has lost his primary in Mississippi:

Palazzo faced corruption allegations. He also is the first cosponsor of the so-called Journalism Competition and Preservation Act (JCPA) to lose a primary this year. A huge loss for the establishment here.

Trump wins again, this time in Illinois. His pick for governor, state Sen. Darren Bailey, has won the GOP nomination:

An interesting picture is coming into focus in New York: With 5 percent reporting in the GOP gubernatorial primary, Andrew Giuliani still leads but only in the counties around New York City in southern Long Island. As other counties begin to report elsewhere in the state, Rep. Lee Zeldin (R-NY) is winning most of these but businessman Harry Wilson is also leading a few of them. Zeldin is slowly but surely cutting into Giuliani’s lead with rural New Yorkers–similar to the Trump coalition. It’s very interesting because Giuliani has presented himself as more aligned with Trump but it seems like the working class outside the city are going more for Zeldin. Still early here but could be interesting how this shakes out in one of the nation’s biggest states.

It looks like the establishment prevailed in Mississippi, too, as Guest seems to have fended off Cassidy there:

O’Dea seems to have won the GOP primary in Colorado for U.S. Senate, too:

Not formally called yet, but this seems pretty solid for him.

In Colorado’s GOP U.S. Senate primary, Joe O’Dea has a nearly 30,000 vote lead over Ron Hanks. O’Dea, with 58.3 percent, seems to be the favorite to win this one with 37 percent of the vote reported so far.

In Illinois, Miller has expanded her lead big time over Davis to more than double digits with 7 percent reporting. She is at 56.1 percent and leads by nearly a thousand votes over Davis’s 43.9 percent.

With 11 percent reporting in the Illinois governor GOP primary, Trump-backed state Sen. Darren Bailey has a huge lead. His 46.8 percent is more than 25,000 votes better than the next best candidate stuck down at 20 percent.

Miller has expanded her lead in Illinois’s 15th district, but it will probably tighten again:

In #IL15, Trump-endorsed Rep. Mary Miller (R) has taken a 52%-48% lead over Rep. Rodney Davis (R) w/ a few counties in her home area reporting. But Davis is looking pretty strong in his base areas. Going to be close.

The polls have now closed in New York and Colorado.

With 3 percent reporting now in Illinois’s 15th district GOP primary, Rep. Mary Miller (R-IL) has taken a slight lead over Rep. Rodney Davis (R-IL). Her 51.9 percent is a little more than a hundred votes better than his 48.1 percent.

With 8 percent reporting in the other U.S. Senate GOP primary in Oklahoma, Mullin is leading big. His 44.5 percent of the vote is nearly 10,000 votes more than the second-best candidate at this time, TW Shannon, who has 18.3 percent.

In the GOP primary for U.S. Senate in Illinois, Kathy Salvi holds an early lead with 4 percent reporting. Her more than 10,000-vote lead is nearly 30 percent better than the second highest vote-getter Peggy Hubbard at this time.

With 1 percent reporting in the 15th district GOP primary in Illinois, Rep. Rodney Davis (R-IL) has a slight lead over Rep. Mary Miller (R-IL). This is a banner race GOP primary between two members.

The very first results are pouring in from across the country. In Mississippi, with less than 100 votes in, Guest has an early lead.

From Trump’s team, this is the list of endorsements he has on the line tonight:

The polls have closed in Mississippi, Illinois, and Oklahoma. Results should be coming in imminently in each place.