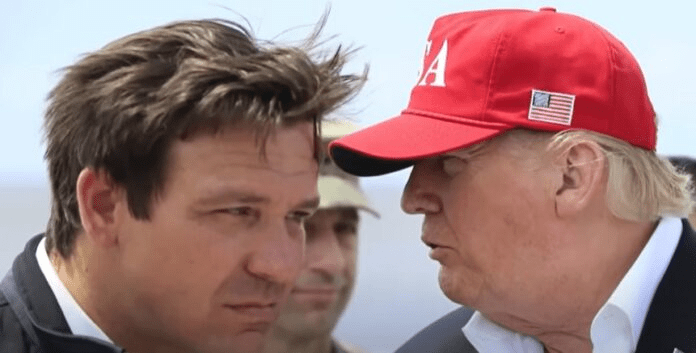 Try as they might, mainstream media liberals won’t be destroying Donald Trump’s relationship with Ron DeSantis any time soon.

The two most popular MAGA-Republicans have been on the rocks as of late — or at least that’s what they want you to think. In reality, Trump and DeSantis “get along” and may even work side by side as the Former President eyes his next White House bid.

As conversations and rumors surrounding 2024 heat up, Trump and DeSantis have been asked on multiple occasions about their plans to trounce the Biden regime. It’s almost a guarantee that Former President Trump will seek a rematch against Biden – if he’s still upright in 2024 – but DeSantis is a little harder to read.

Since then, mainstream media operatives have attempted to pit Trump against DeSantis and vice versa for reasons obvious to anyone paying attention; however, the feud (or what liberals hoped was a feud) is officially over thanks to one statement by the Former President.

The Former President sat down for an interview with Newsmax, a leading conservative publication, and was asked that exact question.

On Thursday, Newsmax released an interview with Former President Donald Trump in which he was asked if a  Trump/DeSantis ticket was in the cards.

Trump responded in kind, saying, “Well, I get along with him,” ending the contrived feud for good.

Make no bones about it, Donald Trump played a direct role in getting Ron DeSantis elected– a fact both men have no problem admitting.

In fact, Trump is responsible for many election victories thanks to his winning endorsements, which have paid off remarkably during this year’s primaries.

An endorsement from the Former President almost guarantees an election victory, especially if your opponent is a RINO, the most undesirable conservative in the game.

During the interview, Trump touted the success of his endorsements, including Illinois state Sen. Darren Bailey and Rep. Mary Miller’s victories in Wednesday’s Republican primaries for governor and Congress.

Republican voters are currently enamored with Governor DeSantis and his approval ratings reflect that. A recent poll showed about 45% would vote for Trump compared to 36% who leaned toward DeSantis.