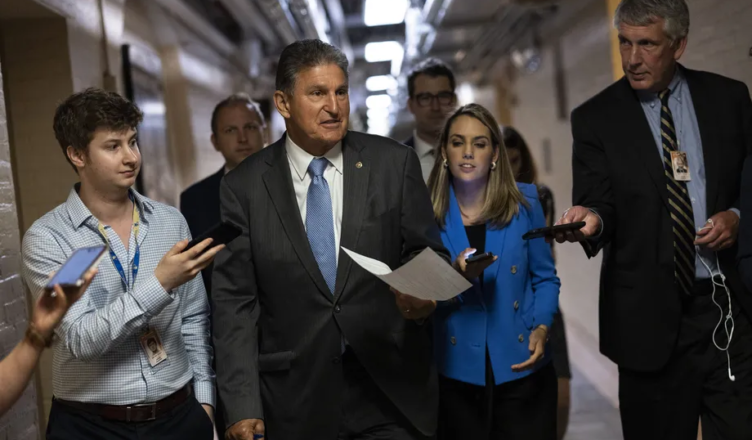 Lawmakers are scrambling to get a deal done before August.

Democrats are struggling to resurrect parts of the Build Back Better Act after the broader package imploded last year.

They’d hoped to put together a trimmed version of the original $2 trillion package, narrowly focused on health care, climate, and tax reforms. Sen. Joe Manchin (D-WV), however, has expressed opposition to additional climate and tax policies, and it now seems the party will have to settle for a smaller bill than leaders wanted, one that centers on lowering prescription drug costs and extending health insurance subsidies.

The Washington Post reported July 14 that Manchin told Democratic leaders he doesn’t want to proceed on climate spending or tax hikes due to concerns about inflation. He is still reportedly open to supporting Democrats’ prescription drugs package as well as an extension to Affordable Care Act subsidies, which are due to sunset at the end of this year. And he has said he may be willing to negotiate again on taxes and climate in September.

If Democrats stay united on these aspects of the bill, they could still pass a substantial piece of legislation that would enable Medicare to negotiate drug prices and help reduce health care costs for millions of people. That said, this version of Build Back Better would fall far short of the transformative climate and social spending package that many lawmakers and activists have been pushing for for months.

What Democrats have agreed on

Thus far, Democrats are aligned on their prescription drugs plan as well as an extension of ACA subsidies.

The drug provisions could be significant, though they are narrower than what Democratic lawmakers were considering last year — the plan doesn’t include proposals some in the party were fighting for, like a $35 per month cap on insulin costs.

Here are the provisions that Democrats agree on so far:

The savings would not apply to people covered by private insurance, however, Reuters reports. The legislation guarantees that Medicare can begin negotiations in 2023, starting with 10 drugs, which will be chosen by the Department of Health and Human Services.

Democrats are trying to do what they can before the midterms

Although Democrats’ electoral chances in the Senate are looking better than they are in the House, it’s possible the party loses control of one or both chambers of Congress following the November midterms. With the elections fast approaching, Democrats are rushing to capitalize on their existing majorities in case they are no longer able to pass legislation next year.

That’s likely to mean passing whatever version of Build Back Better the Senate Democratic caucus can agree on. This reconciliation bill could be the party’s last major chance to approve new prescription drug policy if Republicans retake just one chamber of Congress. If they are able to make quick progress in the coming weeks, it’s possible that Democrats could hold a vote on the reconciliation by the end of July, though Manchin has expressed uncertainty about this timeline.

Republicans have pushed back on these efforts: Senate Minority Leader Mitch McConnell threatened to pull support on the US Innovation and Competition Act, a bipartisan bill aimed at investing in the US’s supply chain, unless Democrats abandon reconciliation. Democrats have responded by claiming McConnell is trying to deter the reconciliation bill in order to protect pharmaceutical companies.

To successfully pass a reconciliation bill, Senate Democrats will need all 50 members of their caucus on board with the legislation, as well as approval from the parliamentarian — who can advise against including provisions if they aren’t seen as sufficiently related to taxing and spending. It seems they now have the former for part of their bill. House Democrats, many of whom have pushed for a more ambitious bill in the past, will need to vote in favor as well.

Update, July 15, 6 pm ET: This story has been updated to include new information on Manchin’s statements about climate and tax policy.